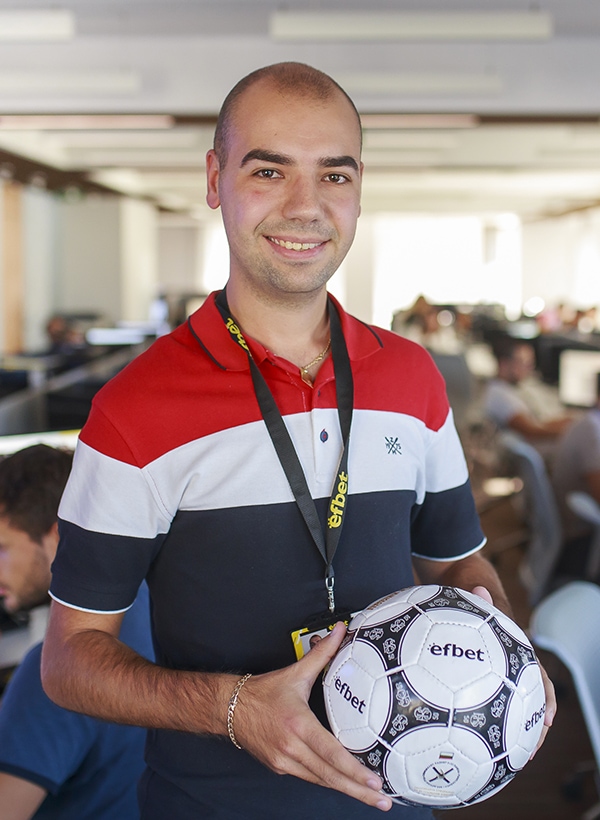 What are the odds of someone walking into the office of Bulgaria’s sports betting powerhouse and start asking questions such as ‘What’s sports betting?’, ‘What’s a trader’s job?’ ‘What does coefficient mean’? Odds are small. So small that no one would wager a single Euro on such a bet. But, here we are: inside efbet’s modern office in Sofia and we are asking exactly those questions to a group of about 90 traders. Some are former football players, others current fans, while some come from casinos or have math backgrounds, but all of them are soaked up by the thrill. That thrill, that makes you enjoy the game full of excitement, although it’s a game you are not part of… at least not on the pitch. But you are part of the game because you’ve placed a bet on a certain outcome, because you’ve used your sports knowledge and you’ve predicted the end result.

These men follow hundreds of games at a time, manage millions and cannot afford to remove their finger from the pulse of the game even for a second. A trader is not someone with 9 to 5 working responsibilities, he must be involved 24/7. And although a trader may sleep, sports and sports betting do not. Everything depends on the trader, but also nothing depends on the trader because even if one gets his numbers right, at the end of the day, everything is decided on the pitch and not without the involvement of destiny. Being superstitious is not mandatory, but on the flip side, for sure it won’t help if you think that you are someone who knows it all.

Let’s go back to the office: at first sight, everyone seems calm, well arranged and locked in: their monitors look like nothing much is going on. But that’s only on the surface. There is a sequence of numbers written on the wall in their room. We asked them what these numbers mean, although we knew what the answer would be. Nevertheless, their answer struck us as a surprise: ‘That’s the ultimate truth’. It’s a variable, how could it be the truth, we asked. Well, whatever happens during the 90 minutes of the game, regardless of the number of attacks, passes, saves, it all comes down to the end result. Sometimes even if you play well, but you’ve lost the game, then you’re a loser. Now that’s the truth! But what do the coefficients say? They were born out of statistics, they are not emotional, they are not fans of a particular teams and they do not care if you’ve played well; only if you scored. They are clean, uncontrollable by human preferences and emotions. But no one can say they don’t change and if they sense a team performing better and improving, they quickly go down.

A trader manages these mighty numbers, follows the sports, while sports – they are global, they are being played around the clock  and people are constantly anticipating the next game, the next great player, and the next goal. A trader is capable of collecting statistical data, devoting himself to his job, but at the same time capable of distancing himself from it, because being a fan may get in the way of the job.

They say making mistakes is part of the game. But if you don’t learn from your mistakes, if you stop developing or double-checking everything you hear, you will never succeed. You will never become a better version of yourself professionally or in a personal aspect. If someone told you they never lost, they never made any mistakes, then they would be lying.

Here you can watch games every day, but that’s not what makes you come to work day in and day out. It’s not the  office or the urge to follow the game in between maths and sports. It’s actually the thrill – the thrill of winning, of losing, of betting on what you believe in, but the others don’t. Being part of a team, but playing for you at the same time. Like many other professions, this one is a dedication. It keeps you awake, it gives you comfort when you are performing well and it makes you believe the best things in life can be predicted.